Click on a detail to see the full image... 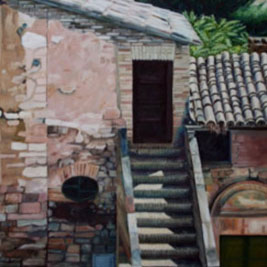 Steve studied Fine Art at the University of Newcastle-upon-Tyne between 1962 and 1967 and specialised in sculpture. He completed a Masters in 1986.

After working at Manchester College of Art he moved into teaching in secondary schools until his retirement in 2004. He ran an Art Department and a Faculty of Creative and Performing Arts.

His output when teaching explored a number of two and three dimensional ideas but was not sustained enough for ideas to really develop. The most significant pieces were probably his Welsh sketchbooks and a number of interesting paintings.

When retirement allowed him to re-engage with the creative process, it was like learning afresh. Nevertheless, his impulse was to revisit subjects which had been a constant preoccupation; walls and bits of buildings in states of erosion and decay. The painting of A Wall in Naples by Thomas Jones in the National gallery has been an encouraging influence. Steve has travelled extensively over the last few years providing him with the opportunity  to collect ideas for paintings. He has tried to use Bedford as a subject, making use of  less obvious aspects of the river and surrounding woodland.

Steve works slowly, mainly in oils, pastels and graphite. He is trying to move into making pieces which make use of his background in sculpture but finds the act of painting very seductive and difficult to set aside for very long.